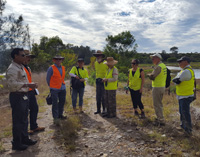 The Authority and Wetland Care Australia came together to organise the NSW Wetlands Forum, hosted at Sydney Olympic Park Aquatic Centre, through the Wetland Education and Training (WET) Program. The key theme for this year’s World Wetlands Day celebration has been Wetlands for Disaster Risk Reduction.

The Forum, hosted by was welcomed by D’harawal Saltwater Knowledge Keeper Shannon Foster and was followed by several speakers including David Papps, Head of Wetlands Section at the Commonwealth Water Holder at the Department of Water, Environment and Energy, who highlighted the significance and status of community engagement in learning and conservation of wetlands.

While the Forum was underway, a group of volunteers were immersed in the Badu Mangrove wetlands with Conservation Volunteers Australia for a clean-up of Sydney Olympic Park’s diverse 175 hectares of wetlands including the largest mangrove forest and saltmarsh ecosystem on the Parramatta River.

Sydney Olympic Park Authority played host to World Wetlands Day celebrations as part of its strategic management of its diverse local environment and to promote greater community awareness of the environmental importance of wetlands.