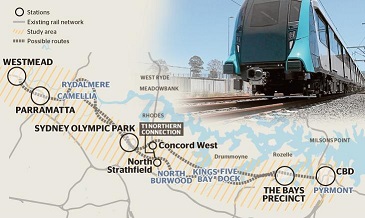 Premier Gladys Berejiklian and Minister for Transport and Infrastructure Andrew Constance announced that after extensive community and industry consultation, the NSW Government has identified further locations for Sydney Metro West.

“Sydney Metro West will become the fastest, easiest and most reliable journey between the Sydney and Parramatta CBDs, which could be as little as 20 minutes.” Ms Berejiklian said. “We have been working hand-in-hand with the community on Sydney Metro West and we have taken on board feedback to make it an even greater infrastructure project for greater Western Sydney.”

Sydney Metro West will now include:

A new underground metro station linked to an existing suburban station on the T1 Northern Line, either at Concord West or North Strathfield, allowing faster connections for customers from the Central Coast and Sydney’s north to Parramatta and Sydney CBD;

These are in addition to already announced stations at Parramatta, Sydney Olympic Park, The Bays Precinct, and Sydney CBD.

Mr Constance said that customers want faster, more reliable journeys across Sydney and that is exactly what is being delivered with the Sydney Metro project.

“With Sydney Metro West, there is a balance between the number of stops and the travel time from Parramatta to the Sydney CBD. That’s why we will work through the intermediate stop options with the community and industry before coming to a final decision”.

“The NSW Government will also safeguard the ability to extend Sydney Metro to the west beyond Westmead, for example as part of a future East-West connection to Western Sydney Aerotropolis, and the south east of the Sydney CBD via Zetland.”

The first Sydney Metro line opens next year in Sydney’s North West – 13 metro stations and a train every four minutes in the peak between Rouse Hill and Chatswood.

The NSW Government is also currently delivering the City & South West metro line, with new underground CBD metro stations at Barangaroo, Martin Place, Pitt Street and Central, which will all open in 2024 when Sydney Metro is extended into the city from the North West.