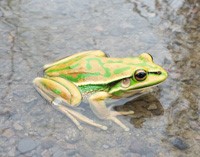 Sydney Olympic Park’s pioneering frog habitat creation and management techniques has resulted in its new status as a priority managed site under the NSW Government Saving Our Species program, which also recognises the Park as  home to the largest remaining Sydney population of the Green and Golden Bell Frog.

Office of Environment and Heritage (OEH) Senior Threatened Species Officer Deb Ashworth thanked the Authority for their valuable conservation efforts, which have greatly increased the long-term survival of this species.

“The Saving Our Species program recognises the successful habitat restoration at this site and has committed $5k in funding for education programs and workshops,” Dr Ashworth said.

“The Authority’s frog habitat creation and management techniques are pioneering. They have created a unique frog sanctuary with a network of purpose-built ponds and wetlands that the frogs now call home and where successful breeding has occurred,” Dr Ashworth said.

“We are delighted as it signals continued management for frog conservation at this site and recognises the importance of the site for the species,” Ms Darcovich said.

“Sydney Olympic Park is a living case study of bell frog habitat management techniques and offers a fantastic opportunity to share knowledge. Educational workshops that bring land managers and scientists together will help conservation of this species across New South Wales.

Sydney Olympic Park Authority aims to protect and enhance the Park’s rich biodiversity, which includes 304 hectares of wetlands, forests and grasslands that house over 400 native plant species and 200 native animal species including the Green and Golden Bell Frog.