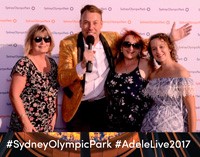 Sydney Olympic Park Sets the Stage for a Global Superstar

Sydney Olympic Park was buzzing with excitement on 10 and 11 March with crowds of almost 200,000 Adele fans flocking in to see their idol perform in front of the biggest crowds of her Adele Live 2017 Australian tour.

Fans were treated to a special red carpet welcome before the global superstar took to the stage at ANZ Stadium.

Hosted by popular stage and Sydney radio personality James ‘Breko’ Brechney, who engaged on-site crowds with vox-pops and Adele-themed trivia, the red carpet event saw excited fans lining up to get ‘papped’ in front of the highly popular red carpet photo wall. The excitement continued as fans were given the opportunity to post selfies to Twitter and Instagram in front of the photo wall, then instantly seeing their photo on a digital big screen.

Crowds arrived early and filled local restaurants and cafes, enjoying the atmosphere and nibbling on international street food available at the many food stalls and trucks in the town centre. Fans were also able to relax with a drink at one of the pre-show events at the Park.

Saturday’s show was accompanied by the Goodlife Presents Your Friends under 18’s dance event at Sydney Showground, drawing in an additional 5,000 people.

All concertgoers were encouraged to catch public transport with an extensive communications campaign coordinated by the Authority working with Transport for NSW and ANZ Stadium, using the power of social media and engaging video to urge people to plan ahead. This campaign proved highly effective, as evidenced by the high public transport patronage on both nights, car parks completely pre-booked before the event and fans arriving early to take advantage of the pre-event atmosphere.

Sydney Olympic Park Authority worked to ensure safety and a positive visitor experience on both nights with an increased amount of staff on the ground, multiple visual messaging signs to assist in wayfinding, an information booth and a designated drop off and pick up zone in place.

The Adele concerts put Sydney Olympic Park’s capability to the test and proved that it is one of Australia’s premier destinations for major events.  Sydney Olympic Park Authority worked closely with Transport for NSW, ANZ Stadium, Sydney Showground, NSW Police and other stakeholders to ensure that each event was a huge success in delivering social and cultural opportunities and significant economic benefits for the people of Sydney and NSW.