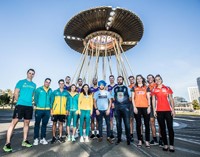 On 15 September 2000, the world watched Cathy Freeman ignite the Cauldron to open what was subsequently described as ‘the best Games ever’. 17 years later, the legacy of the Sydney 2000 Olympic and Paralympic Games has been re-imagined into a vibrant place to live, work, learn and play.

The ongoing transformation of Sydney Olympic Park was celebrated at Cathy Freeman Park, where the Olympic Cauldron burnt brightly on Friday 15 September 2017.

A number of athletes who currently use Olympic Park’s legacy venues to train, compete and excel in sport attended the Cauldron-lighting event, including diving and swimming champions, players from the Sydney Kings NBL team, GWS AFL team, NSW Swifts and GIANTS Netball as well as representatives from NSW Rugby League.

“17 years on from the ‘Best Games ever’, Sydney Olympic Park is a thriving suburb for commercial, residential, recreation, events and education. The Park has become a well-loved part of Sydney, playing a significant role for both the community and the NSW economy,” said Stuart Ayres, Minister for Sport and Minister for Western Sydney.

Located in the demographic heart of Sydney, Olympic Park continues to grow with a current daily population of more than 23,000 residents, workers and students. Sydney’s most vibrant mixed-use location, the Park now has more than 230 businesses operating on-site, including restaurants, cafés, hotels, commercial offices and retail outlets.

Covering 640 hectares, 430 of which are parklands and picturesque green space, the Park today serves as a social hub for people to enjoy 35km of cycle paths and walking trails, BBQ and family picnic facilities, bird watching, playgrounds and water play areas.

The Park’s public parklands and natural environments host more than 80,000 cyclists per month and the Park’s sporting and educational facilities host 500,000 student visitors per year. With myriad commercial and residential developments within the Park either underway or planned, Sydney Olympic Park will continue to grow and develop for years to come.