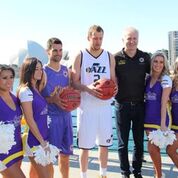 The NBL Executive Chairman and Owner Larry Kestelman and NBA Asia Managing Director Scott Levy recently announced that the Sydney Kings will play Utah Jazz in October as part of an historic series of games between NBL and NBA clubs.

Sydney Kings will play Utah Jazz, featuring Australians Joe Ingles and Dante Exum, at Vivint Smart Home Arena on October 2 in the first of three matches in the U.S. between NBL and NBA teams.

Sydney Kings CEO Jeff Van Groningen said: “This is a very exciting opportunity for our club and I want to thank the NBA and NBL for making it possible. For our club to be chosen is a great endorsement of Sydney Kings and the NBL in Australia.

“This is an opportunity to showcase the Kings on the biggest basketball stage in the world and for our players to test themselves against the world’s best.”

Utah Jazz President Steve Starks said: “The Jazz are the most internationally diverse team in the NBA, including two players from Australia.  Our franchise is excited to host an NBL team from Sydney in the first game played at our newly remodeled Vivint Smart Home Arena on Oct. 2.”

Utah Jazz guard/forward Joe Ingles said: “This is massive for Australian basketball and an exciting opportunity for NBA and NBL players to compete together on the same floor.

“As an Aussie who began my career in the NBL and now entering my fourth season with Utah, I am very proud of the growth of the game in my home country and can’t wait for the Jazz and Salt Lake City to play host to Sydney this fall.”

Sydney Kings Coach and five-time Olympian Andrew Gaze said: “This is another big leap forward for the NBL and Sydney Kings.  As somebody who played in the NBA I know how much this opportunity means.

“The NBL has always been very attractive for NBA players and is a pathway to the NBA, as the recent drafting of Terrance Ferguson showed.  We also had a number of NBL players played in the NBA Summer League this year.”

The NBA and the National Basketball League (NBL) today announced that the Sydney Kings, Melbourne United and the Brisbane Bullets will take part in the 2017 NBA preseason in October, marking the first time that NBL teams will travel to the U.S. to play against NBA teams.

There were a record-tying eight Australian players on 2016-17 opening night NBA rosters, including Ingles and Patty Mills (San Antonio Spurs), both of whom previously played in the NBL.