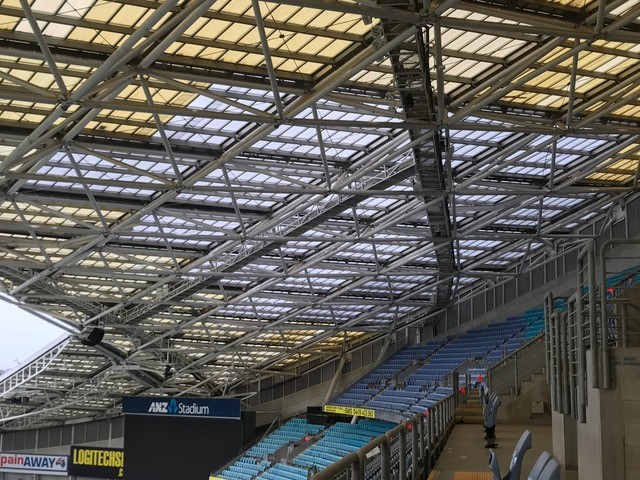 It has helped keep more than 24 million fans dry since 1999, but ANZ Stadium’s existing roof is being replaced to immediately enhance the fan experience at major sporting and entertainment events.

More than 400 roof panels – or 4.5 hectares of roof sheeting – is currently being replaced as part of the Olympic stadium’s Facilities Management Maintenance Program.

The roof replacement will work in synergy with the upcoming ANZ Stadium Redevelopment, which is due to commence in 2019.

The NSW Government announced in April 2016 that ANZ Stadium – Sydney’s Olympic showpiece – will be transformed into a world-class rectangular stadium as part of a $1.6 billion investment in NSW sporting infrastructure.

A retractable roof with the potential to cover the entire arena has been proposed as part of the redevelopment.

The existing roof structure provides protection from the elements for more than 75 per cent of fans at the 80,000 capacity ANZ Stadium, which was purpose-built for the 2000 Sydney Olympic Games.

ANZ Stadium’s General Manager of Asset Management, Simon Davies, said: “The structural integrity of the old polycarbonate roof covering has been compromised. The old sheets are being removed, one at a time, and replaced with an upgraded polycarbonate product.

“The new polycarbonate being installed has been specifically designed for ANZ Stadium and with a slightly thicker top layer, which will ensure an increased life cycle and resistance to future hail storms.

“The new polycarbonate roof material should be in place for the next 20 years at least and is compatible with the retractable roof being considered in the redevelopment of the Stadium.”

A decision was made to carry out a full replacement of the roof sheeting at the Stadium in the wake of large-scale hail damage that occurred in Western Sydney in 2015.

Once completed, fans will notice a dramatic effect at upcoming events in terms of appearance and light transmission.

Palram has developed a special product especially for ANZ Stadium to meet the rigours of weather in Western Sydney.

“This new product will address the longer term resilience required by the Stadium’s Facility Management Plan and reduce the future roof replacement cycles that were originally budgeted for. It will also provide a much longer warranty period,” explained Davies.

“The new roof features three different light transparencies – 22 per cent, 30 per cent and 60 per cent – to satisfy the position they are placed on the roof and the protective function they are required to perform.

“The sheets are a solar control grey colour with the 60 per cent clear material transparency positioned closest to the pitch to assist with enhanced light transmission and grass quality.

“If you are seated back further in the seating bowl you will have less transparency above you, and greater protection from the elements.”

Mr Davies added that the removed polycarbonate sheeting and aluminium fixing materials were being recycled for manufacture into new products – a requirement of ANZ Stadium’s commitment to improve the environmental sustainability practices to best possible standard.

This represents some 95% of all removed materials. A relatively small volume of glazing rubber weathering strips are not able to be recycled in Australia at this time.

The re-sheeting of the main roof commenced in early January and good progress has been made, which should ensure that all works are completed by September 2017 or earlier.

Global construction and engineering company Laing O’Rourke is the contractor with the responsibility to deliver the new roof.

Fans will notice a progressive and dramatic change to the appearance and event experience in the Stadium, and the construction phase will have little discernible impact of major events this year.