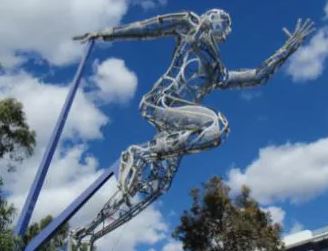 The Sydney Motorway Corporation has released plans to place the 12M tall, 2.5 tonne monument ‘The Sprinter’, on a strip of land where WestConnex meets Homebush Bay Drive.

Until recently, the sculpture created by Sydney artist Dominique Sutton for the 2000 Olympic Games was located on the corner of Edwin Flack and Dawn Fraser Avenues, near the Olympic Park Athletic Centre.

The corporation’s plans show the monument will stand on an 18m tall hill, constructed from 8500 tonnes of soil left over from construction of WestConnex.

It will be illuminated at night by LEDs and floodlights “to ensure it is visible for east and westbound traffic”.

The SMC said the aim of the sculpture was to assist the travelling public to readily identify Sydney Olympic Park as a key place of business and international events.

The project is due to be completed by next year and is part of the M4 East Legacy Project, which aims to increase open space along the motorway route.