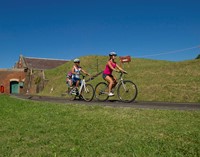 City of Canada Bay Council and City of Parramatta Council have teamed with Sydney Olympic Park Authority to plan and deliver a network of world-class walking and cycle paths linking both cities via a network around Homebush Bay.

The Homebush Bay Circuit will provide visitors with water views and information on sites of significance along with local flora and fauna, attracting both local residents and tourists alike.

The pathway will extend the already existing route between Sydney Olympic Park’s 35km of cycleways and City of Parramatta cycleway network, of which the final link connecting the two was recently completed, through to City of Canada Bay’s network.

A series of community consultation sessions were recently held to ensure that the Homebush Bay Circuit will, once completed, meet the diverse needs of the region’s walkers, runners and cyclists and ensure seamless connectivity with the Park’s existing cycleway network.

Active transport and recreational walking and cycling are important for the health and sustainability of communities. Sydney Olympic Park Authority continues to work with other Government councils to deliver these community benefits.