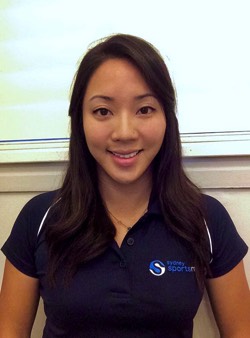 Melanie is a Canadian born, Australian trained physiotherapist with a special interest in sports, long term athlete development, and functional rehabilitation and, has recently joined the team at Sydney Sports Medicine Centre.

Melanie is an advocate for gender equality in sport, by constantly promoting access to sport therapy in female sports and engaging others to be a catalyst for positive change.

She has been playing rugby union for over 10 years and has played at the university and club level, with Championship wins in the 2015 and 2016 Sydney Women’s Rugby Union competition.

Melanie completed her Master’s in Physiotherapy at the University of Sydney and also has a Bachelor of Science degree with honours majoring in Kinesiology from McMaster University, Hamilton, ON, Canada.

Before moving to Australia, Melanie worked at the McMaster University High Performance Area as a Strength & Conditioning Coach for university athletes. As an Exercise Physiologist, she worked in private practice clinics to rehabilitate athletes and in community-based settings to rehabilitate people with spinal cord injury, traumatic brain injury, and other complex orthopaedic injuries.

Melanie has experience in both private practice clinics and on-site sports coverage. She has expertise in a variety of sports including Rugby Union 7’s & XV’s, Rugby League, AFL, Soccer, Netball, and Gymnastics varying from club, national, and international level. She is the lead physiotherapist for the Canada Raven’s in the 2017 Rugby League World Cup, and was lead physiotherapist for the Sydney NSW XV’s Representative Rugby team, with experience touring with the team to New Zealand and the National Championships. She has also served as a physiotherapist for the NSW team at the 2017 Australian Gymnastics Championships and worked with the Manly Warringah Gymnastics Club.

Melanie’s in clinic service approach is with a hands-on and movement focus. She provides education and strategies for people to address and recover from their injuries. Through the use of soft tissue and myo-fascial releases, joint mobilisations or manipulations, muscle energy techniques, movement pattern corrections, and exercise programs, Mel individualises a treatment plan suitable for all ages and activity levels.

Melanie is at SSMC Tuesday to Saturday.