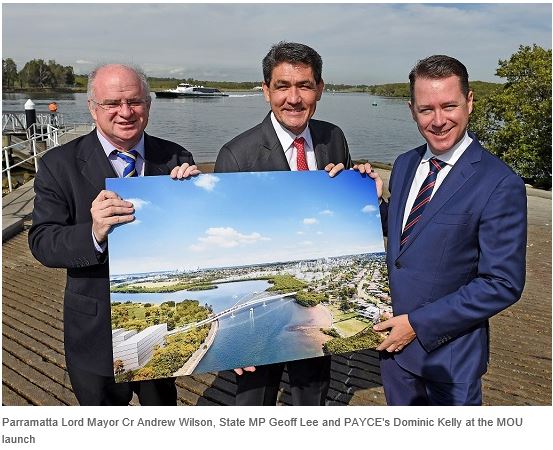 City of Parramatta Council has signed a Memorandum of Understanding (MOU) with property company, PAYCE enabling detailed planning and design work to commence for a possible new bridge across the Parramatta River linking Melrose Park and Wentworth Point.

The ‘Gateway Bridge’ has been proposed by PAYCE, the original developer of Wentworth Point and the major landowner of Melrose Park. The company will engage specialist consultants to carry out the initial detailed design work, and will fund all costs associated with this stage of the bridge project.

“A new bridge over the Parramatta River improving access into, and out of Wentworth Point, with the capacity to support light rail would be a game changer for the Olympic peninsula,” the Lord Mayor said.
“There is a good distance to go, but PAYCE are to be congratulated on how quickly and thoroughly they have responded since I first raised this with them.

“Council will do what it can to help facilitate the design and planning for the Gateway Bridge, and we look forward to working with PAYCE and other stakeholders to progress the project.”

Stakeholders to be engaged by PAYCE during the design phase of the bridge will include Transport for NSW, Roads and Maritime Services, Department of Planning & Environment, Sydney Olympic Park Authority, City of Ryde and the Greater Sydney Commission.

The bridge will be designed for bus, pedestrian and bicycle traffic. It could also provide a river crossing for the proposed second stage of the Parramatta Light Rail network, which the NSW Government has announced will extend through Sydney Olympic Park and Wentworth Point before crossing the Parramatta River to Melrose Park, Ermington, Rydalmere and Camellia.

“This agreement with PAYCE represents a unique opportunity to deliver a much needed new link for our City at no cost to ratepayers,” Cr Wilson said.

“The ‘Gateway Bridge’ would connect two of Parramatta’s emerging suburbs and improve transport connectivity in a key part of our LGA, and we look forward to seeing it become a reality.”