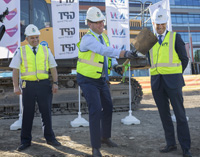 “The new Headquarters will provide the best possible support to more than half of the State’s RFS personnel and volunteers who are based in rural and regional locations across NSW,” Mr Grant said.

In the event of an emergency, a number of agencies, including Fire & Rescue NSW, Bureau of Meteorology, Transport, Railcorp, NSW SES, Forestry Corporation, NSW National Parks & Wildlife Service and NSW Police will co-locate together at the new Sydney Olympic Park Headquarters.

NSW RFS Acting Commissioner Rob Rogers said the Headquarters building is critical to the management of fire emergencies across the State.

“Under our coordinated fire fighting arrangements in NSW, all agencies work together to ensure the community is kept safe through the deployment of resources, as well as the transmission of information and emergency warnings.”

Sydney Olympic Park Authority has worked closely with the Rural Fire Service over the past few years, particularly during the Blue Mountains bush fire crisis where the Park was used as a rest and staging area for fire crews and volunteers and at the start of several bush fire seasons to launch new equipment, such as the air cranes Malcolm and Elvis. The RFS move into the Park will only strengthen the relationship and open more opportunities for collaboration.