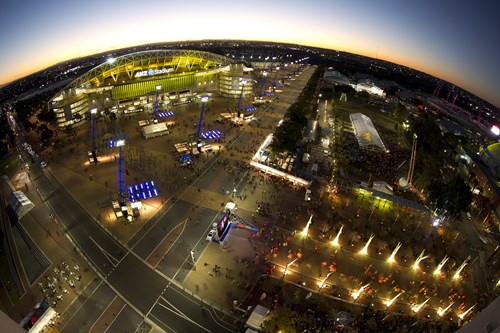 ANZ Stadium will be transformed in to one of the world’s great rectangular stadiums as part of a significant investment in sporting and entertainment facilities in this State, the NSW Premier announced today.

Premier Gladys Berejiklian said that works will begin on a new 75,000-seat rectangular stadium in 2019, with the aim that Sydney will have a new major events rectangular Stadium at Sydney Olympic Park by 2022.

Ms Berejiklian said the investment in stadiums would ensure NSW remains the No.1 destination for major sporting and entertainment events well into the future.

Venues NSW is the owner, coordinator and promoter of a portfolio of key sports and entertainment assets in NSW including ANZ Stadium. It has joined with the ANZ Stadium family of clubs, sporting codes, Members and fans in celebrating this decision to deliver in Western Sydney a new 75,000-seat rectangular stadium with a world-class playing and spectator experience.

The Stadium redevelopment will underpin delivery of an exceptional world-class sporting, entertainment, cultural and retail hub at Sydney Olympic Park.

In tandem with the new 30,000-seat Western Sydney Stadium under construction at Parramatta and the planned 45,000-seat stadium at Moore Park, the 75,000-seat ANZ Stadium redevelopment will reinforce Sydney’s position as Australia’s true global city and drive the NSW visitor economy to unprecedented levels.

Mr Kerry, said: “The NSW Government must be congratulated on delivering an exceptional outcome on major event infrastructure in this State. The Government’s investment will deliver an outstanding network of major stadiums for NSW.

“Confirmation of a new 75,000-seat rectangular stadium to replace ANZ Stadium at Sydney Olympic Park is fantastic news for everyone who appreciates sport and entertainment, the sporting codes and clubs and entertainment promoters that use the Stadium, and our valued Stadium Members.

“The Government has committed to a world-class Stadium for the future in the geographical heart of the city, where Australians and visitors from across the globe can come together in celebration of excellence in sport and entertainment.

“We look forward to working with Government to bring the new Stadium to life and for this project to be an engine for future growth in the Sydney Olympic Park precinct and throughout Greater Sydney.”

With the historic A-League/W-League Double Derby on Saturday 9 December capping a memorable 2017 Calendar of Events, sport and entertainment fans can also look forward to another fantastic year of events at the Stadium in 2018.

The 2018 ANZ Stadium Calendar of Events is headlined by an International Double-Header pre-season rugby league event in February, the Ed Sheeran concerts in March, a Round 3 NRL Double-Header leading in to the Round 4 Easter Footy Fest matches on Good Friday and Easter Monday, a stand-alone Sunday State of Origin game on Sunday 24 June, the Bledisloe Cup Test on Saturday 18 August, and the NRL Grand Final in September. The NRL has confirmed that 34 regular-season matches will be played at ANZ Stadium in season 2018, and five Western Sydney Wanderers A-League games have also been locked in.

Today’s confirmation of the full redevelopment of ANZ Stadium supports the NSW Government’s commitment to other major infrastructure projects in Western Sydney.

It follows the announcement on 18 October by Premier Berejiklian and Transport & Infrastructure Minister Andrew Constance that a Stage 2 extension of the Western Sydney Light Rail project will connect Sydney Olympic Park with Parramatta.