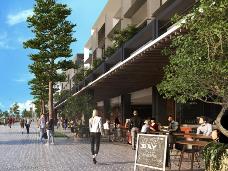 At the unveiling of its new Pavilions development recently — the proposed 690 apartment project at the gateway to Sydney Olympic Park — Mirvac vowed to make it easier for first home buyers to compete in the fiercely competitive and expensive Sydney market by offering 60 of its lowest price apartments exclusively to first homebuyers. The initiative is called The Right Start.

In addition, first-time buyers will be able to purchase the apartments, priced between $575,000 to $749,000, with just a 5 per cent deposit, which is around half the group’s usual deposit requirement.

The apartments set aside are priced to qualify for the State government’s First Home Owner grant and or stamp duty concessions.

Mirvac’s General Manager of NSW Residential and Major Projects, Toby Long, said Sydney’s high prices have reached the point where a generation of young people faced the prospect of never owning their own home.

“We’ve been looking at affordability for some time trying to find ways to give first home buyers an opportunity to get into the Sydney market,” Mr Long told news.com.au.

“We were looking at the pain points and two of the biggest pain points first home buyers have is not having the opportunity and then not being able to save up that 10 per cent deposit.”

The remaining 5 percent of the usual 10 percent deposit can be paid in two annual instalments of 2.5 percent. This means by the time the apartment reaches settlement — the development is due to be completed in 2020 — the first homebuyer will have the full deposit.

“This secures the property while the first homebuyer continues to save for the full 10 per cent deposit,” Mr Long said.

Mirvac is in discussions with a lender for a “referral” partnership to obtain conditions and pre-approval, however, given the development won’t be completed until early 2020, Mr Long said funding shouldn’t be a big issue.

“The thing to remember is it isn’t a 5 per cent deposit at settlement, they build up to the 10 percent when they finally settle — so it is over two years out before they have to finally settle on the project,” he told news.com.au.

NSW Planning and Housing Minister Anthony Roberts has praised the initiative, saying he was encouraged to see the industry addressing housing affordability.

“The State Government has made housing affordability a priority issue but, it is a problem that has to be tackled on many fronts,” Mr Roberts said.

schemes such as putting aside a percentage of properties for key workers and first home buyers while we work on the longer term issues.

“Sydney Olympic Park is one of our priority areas where we have produced a draft revision of the master plan that will provide homes for around 23,000 people, with more parks and open space and more retail.”

Mr Long confirmed to news.com.au that Mirvac has not received any government kickback or grant for offering affordable housing through Pavilions and The Right Start initiative.

“It is in everybody’s best interest to have a community that can access their right to home ownership and have a place to live,” he said.

“Essential workers — fireman, nurses, the bus driver — are finding it very difficult to live in Sydney but we all know that a diverse community is the best community. It is a whole community issue.”

He also confirmed that if there is strong interest, Mirvac will offer more affordable housing for first home buyers in the second release of Pavilion — as well as consider including a proportion of affordable housing in future developments.

“We will look at this with a lot of interest to see how it goes and how it can be rolled out in other developments,” he told news.com.au.

Another 21 lower priced apartments will also be handed back to the Sydney Olympic Park Authority to be managed as affordable rentals.

“There are two parts to affordability,” Mr Long said.

“There is housing affordability for owner-occupiers and the affordable rental market.”