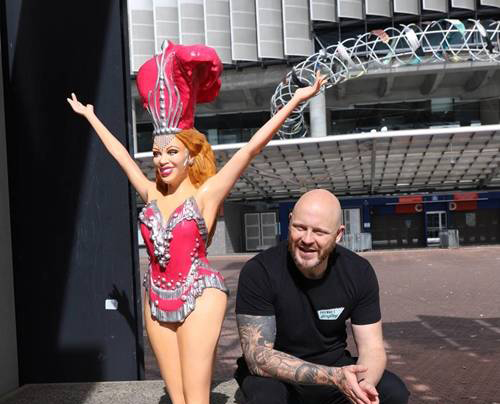 Kylie Minogue has undergone a stunning makeover and has returned for a memorable, show-stopping appearance at Sydney Olympic Park that does not involve singing or dancing.

After 12 months of precision planning, the “almost lifesize” (1.7m high) sculpture of Kylie was escorted into Olympic Park, replicating a sculpture that was created to commemorate the first anniversary of the 2000 Sydney Olympic Games.

Sydney Olympic Park Authority commissioned the original artist Daz Burgess to recreate the very popular statue that paid homage to Kylie’s performance of Dancing Queen at the 2000 Closing Ceremony and was originally installed atop a sequined pole in 2001.

Daz said he was thrilled to craft a second Kylie sculpture.

“Artists almost never have the chance to improve on a piece they have created, so this opportunity was very exciting,” Daz said.

He said technology had improved greatly in the past 20 years, so the new Kylie was very much an improved version.

“Digital technology allowed us to take the actual image of Kylie and create a digital replication to craft a much more accurate and realistic sculpture,” he said.

Daz said it had taken almost 12 months and a team of experts to craft the stunning new Kylie, who has a steel framework and fibreglass finish.

“A large team of expert craftsmen created this amazing piece – it has been such a pleasure to see her come to life.”