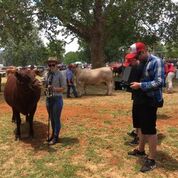 If you’re happy and you know it then you really ought to show it! This classic kids’ song is taking a pop-rock twist as the 2017 Sydney Royal Easter Show advertising campaign rolls out. The original lyrics are tweaked to remind audiences of the magic of the Show featuring its happiest aspects including carnival, entertainment and agricultural experiences.

Various versions of the jingle have been making waves on metro and regional television and radio stations around the state from March. The 30 second television commercial was filmed over three days at Sydney Showground and the Dorrigo Show by director Daniel Jameison.

An extensive digital advertising line-up including display, programmatic and social across a number of platforms will aid in reaching Showgoers along with radio partnerships and print ads. The Sydney Royal Easter Show Official Guide will also be inserted in The Sunday Telegraph on Sunday, 26 March. It’s all about maximising ticket sales and ensuring that city families come to the Show that’s designed to engage, entertain and educate on the value of sustainable agriculture and quality produce.

This is an ad campaign that embodies happiness with images of mouth-watering food, smiling faces, beautiful animals, carnival action and, of course, clapping hands.

“I tell them if that happens, to look for someone in a green shirt, they’ll help.”