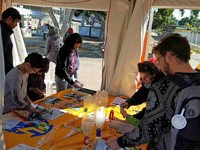 Presented by Sydney Olympic Park Authority and Inspiring Australia, the Innovation Games at Cathy Freeman Park was a hands-on way for all in attendance to learn more about science, sport and technology in a fun, family-friendly environment.

Start up companies from the Sydney Sports Incubator featured amongst the exhibitors with their applications and innovations, and the work of the organisation, capturing the attention of our local Federal MP.

Fans participated in a range of physical and mental challenges from boomerang battles to extreme orienteering and feats of fitness to keep brains firing and bodies moving. NRL were great sports throughout the day with a constant stream of people racing against the speed gun and testing their kicking accuracy and two very special Aboriginal artworks were created over the course of the day with the Murama Indigenous Youth lead by Kim Tilley, Shirley Gilbert and Dr John Hunter.

Demos of latest technologies were a great attraction, with people lining up to play with Samsung’s virtual reality equipment and get their hands on the drone simulators of One Giant Leap. There was also plenty to see and hold in the natural world with hundreds of kids getting right up close to owls, turtles, snakes and lizards.

There was a continuous stream of people wanting to be one of the first to set foot in the recently launched NSW Smart Shuttle, a driverless vehicle that is currently being trialled at Sydney Olympic Park by Transport for NSW and HMI Technologies.

The Augmented Reality Treasure Hunt that had people racing around the site discovering NRL Bulldogs avatars and collecting ‘Quantum Tokens’ for completing a range of science challenges and questions.

Fizzics Education had all eyes glued to the stage with their Big Science Show followed by the famous Dr Karl and his whirlwind tour through an amazing world of science fact and fiction. Prize winners were then announced by the Minister for Science and Innovation, Craig Laundy, who toured the event and stayed around for some big science fun on the main stage in honour of National Science Week.

Sydney Olympic Park Authority worked closely with key stakeholders including Inspiring Australia, Samsung, OneGiantLeap, NRMA, Australian Electric Vehicle Association, Australian Museum, the Sydney Sports Incubator and others, to bring together a successful event and continue to facilitate events to bring the community together.