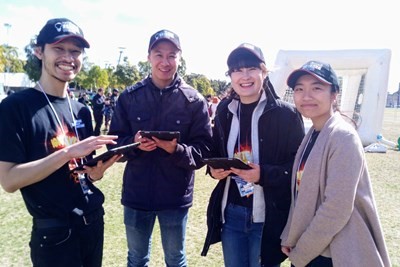 An AFL match at Sydney Olympic Park will be amongst the most unusual locations to come alive with science as part of this year’s National Science Week.

The Innovation Games coordinated by Sydney Olympic Park Authority has recently been announced as a recipient of the 2018 National Science Week Grants providing funding for science engagement activities to take place during Australia’s largest celebration of science this August.

“This year’s grants recipients have exhibited tremendous creativity in developing such an exciting range of activities to engage people of all walks of life and in all corners of Australia with science,” Senator Seselja said.

Sydney Olympic Park Authority Chief Executive Officer Charles Moore is delighted the Innovation Games has received recognition from the Federal Government on its contribution to engaging the community with science and technology.

“Working with the GWS Giants, we are pleased to be able to engage with Sydney and showcase science and innovation in this most unique setting during National Science Week,” shared Mr Moore.

“This year’s Innovation Games will focus on ways that science, technology and innovation at Sydney Olympic Park contribute to health and wellbeing for young people; smart solutions for great cities and getting into nature.”

The Innovation Games is presented by Sydney Olympic Park Authority in partnership with GWS Giants and a range of service providers.