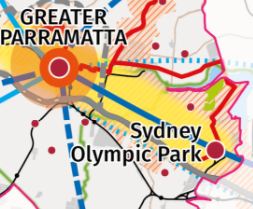 In response to submissions and feedback from stakeholder and community engagement, the Greater Sydney Commission has released revised new plans aligned to the draft Greater Sydney Region Plan.

The Greater Sydney Region Plan and Transport for NSW’s (TfNSW) draft Future Transport 2056 Strategy have been developed in coordination to ensure Sydney’s long-term land use and transport plans are aligned and deeply integrated.

Sydney Olympic Park will be an important hub of the Greater Parramatta and Olympic Peninsula (GPOP) within the Central River City.

There are several ways you can have your say and you are encouraged to do so.

An overview of the Plans for Greater Sydney and Future Transport 2056 are on exhibition until 15 December and can be viewed HERE.  Submissions can be made directly through the GSC website.

It is envisaged the Plans will be finalised in early 2018.