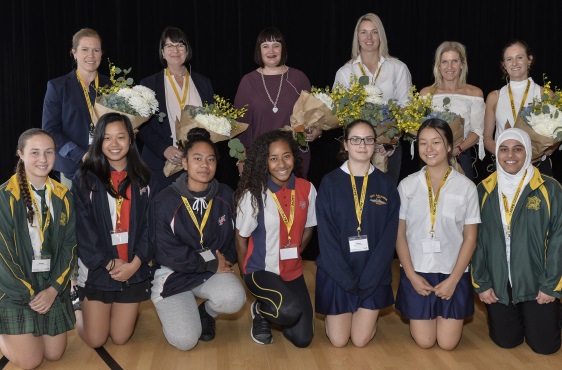 Goals for Girls – Careers for Women in Sport

To celebrate International Women’s Day, renowned sport, dance and physical education tertiary institution ACPE, brought together a who’s who of the Australian sporting industry to showcase the expanding opportunities for women in sports, to the next generation.

Over 100 high school students from a group of Western Sydney high schools were hosted at the ACPE Sydney Olympic Park campus with a breakfast and panel discussion called Goals for Girls: Careers for Women in Sport.

Emma Swanson, a marquee player for the new GWS Giants AFLW attended the breakfast in her capacity as a female athlete in sports’ newest league, and also as a new ACPE student starting her first semester as part of the Elite Athlete Program.

“As a longstanding supporter of the women’s sporting community, today was about proving to students considering their future career options that the doors are well and truly opening for women in sport as the community embraces female athletes like never before,” said ACPE Head of Department – Health Science, Mikah Van Gogh.

“We’re seeing female athletes start to steal the spotlight from their male counterparts with record crowds, revamped and new leagues and TV deals breaking new grounds for women in sport, and there’s so much more to come. There’s never been a more exciting time for female athletes to consider joining the world of representative sport.”

Mikah said ACPE had a unique insight into the dynamics of women in sport, having started as a physical education training institute specifically catering to young women until the mid-1970s, and more recently developing its Elite Athlete and Coach program.

“We designed our program to help elite sportspeople pursue their passion for high-performance sport while also planning ahead for fruitful careers outside of that sphere by having a degree behind them. It is important for us that both genders are equally represented in this program, and with this in mind, we recently introduced targets to achieve a 50% proportion of females by 2020,” said Mikah.

Westfield Matildas and Sydney FC player Amy Harrison joined ACPE’s Elite Athlete and Coach program after tearing the ACL in her knee that put her in rehabilitation mode for 12 months. She is currently studying a Bachelor of Health Science (Sport) and hopes to eventually work in exercise physiology or as a PE teacher.

“ACPE gave me the flexibility to stay on top of my study requirements while maintaining my commitments to training camps and travelling for competitions. Where I’ve found it hard to make it to campus, I’ve always got the support I need from ACPE,” said Amy.

The ACPE Elite Athlete and Coaching Program provides each student with a dedicated coordinator who provides tailored support to plan their study program around their sporting commitments. ACPE has supported female elite athletes, coaches and officials in their study over many decades, including Ruth Hackney who represented NSW at the Australian Women’s Track and Field Championships in the 1930s through to more recently Olympic basketball player Rachel Jarry from the Australian Opals.

ACPE is proud to partner with a number of women’s sporting organisations including the GWS Giants AFLW, NSW Swifts and Sydney Thunder.