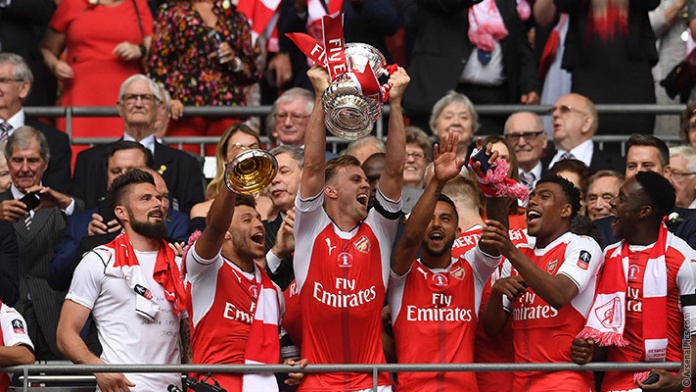 The FA Cup Champions are heading to Sydney in July! Arsenal secured their third FA Cup title in four seasons with a thrilling 2-1 over Chelsea at Wembley and are now gearing up for their first trip Down Under in over 40 years.

The historic victory sees the Gunners lift the trophy for a record 13th time – ending the season on a high before they begin their #ArsenalinSydney Tour in mid-July.

Arsenal will play back-to-back blockbusters against Sydney FC (Thursday 13 July) and Western Sydney Wanderers (Saturday 15 July) at ANZ Stadium as they begin preparations for next season.

The Gunners’ legendary manager, Arsene Wenger, has confirmed his attendance on the Tour by signing a new contract extension that will see him lead the club for at least the next two seasons.

“I love this club and I am looking forward to the future with optimism and excitement,” Wenger told Arsenal.com.

“We are looking at what we do well and how we can be stronger everywhere. This is a strong group of players and with some additions, we can be even more successful.

“We’re committed to mounting a sustained league challenge and that will be our focus this summer and next season.

“I am grateful to have the support of the board and Stan in doing everything we can to win more trophies – it’s what we all want and I know it’s what our fans around the world demand.”

Arsenal will undertake a host of fan engagement activities when they hit our shores next month for the #ArsenalinSydney Tour with a number of activations planned around the city and outside ANZ Stadium on the two game days.

Plans are currently being developed to give fans the opportunity to be photographed alongside the iconic FA Cup trophy ahead of the games. This is truly an event not to be missed.