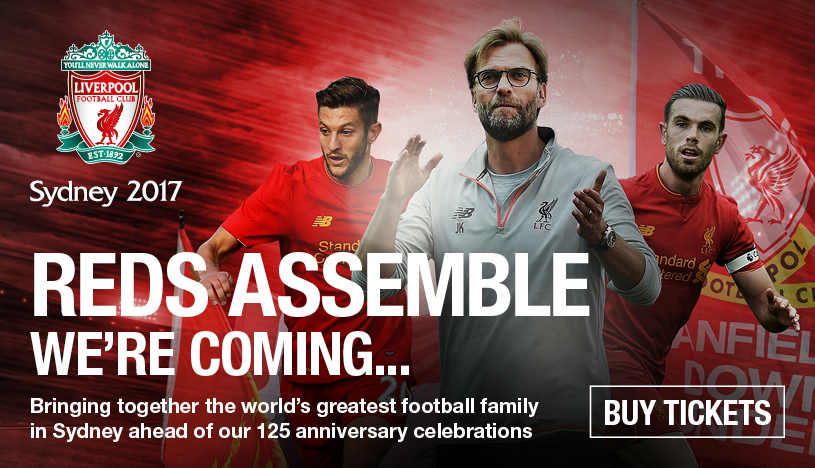 English Premier League club Liverpool FC, widely considered one of the biggest football clubs in the world, will take on runaway A-League ladder leaders Sydney FC on Wednesday 24 May at ANZ Stadium.

Liverpool Manager Jurgen Klopp will bring his first team squad for the blockbuster game and they will be joined by Liverpool FC Legends Steven Gerrard, Jamie Carragher, Daniel Agger and Steve McManaman.

General public tickets are on now via Ticketek.

Passionate Liverpool FC fans can buy into The Kop at the northern end of ANZ Stadium, which will replicate the scene at the Reds’ famous home ground Anfield.

“Sydney is the events capital of Australia and we are excited that Liverpool FC has chosen to play here,” Ms Berejiklian said.

“Securing this match is another example of the NSW Government’s commitment to building a world-class calendar of events to drive visitation to our State.”

NSW Minister for Tourism and Major Events Adam Marshall said: “This match is expected to draw 10,000 overnight visitors from across Australia and the world who will contribute over $6.5 million to the NSW economy.”

The Liverpool FC match will precede the start of Vivid Sydney, the world’s largest festival of light, music and ideas, on Friday 26 May.

“I encourage football fans to book their trip to Sydney and while they’re here, stay on to enjoy everything our State has to offer – from the spectacle of Vivid Sydney, to the wide array of activities on offer in regional NSW,” Mr Marshall said.

This is the first occasion that Liverpool FC’s first team has played in Sydney. The Club was last here in 2016, when a Legends team along with Steven Gerrard took on a team of Australian Legends players in front of 41,000 fans at ANZ Stadium.

Liverpool FC Ambassador, the legendary former Reds player Ian Rush, said:  “We have so many incredible fans in Australia and there is always a brilliant atmosphere when we play over here.

“This is the first time the lads have played in Sydney and they’re really looking forward to a great match against one of Australia’s best A-league teams.”

Mr Daryl Kerry, Chief Executive of VenuesLive, operator of ANZ Stadium, congratulated the NSW Government on delivering another spectacular sporting event to Sydney, and said the excitement among Liverpool fans and sporting fans in general will be palpable in the lead-up to the game.

“Liverpool FC is one of the world’s most famous sporting clubs and it will be a very special occasion seeing the Reds run out on to ANZ Stadium to take on Sydney FC in front of a capacity crowd on Wednesday 24 May,” Mr Kerry said.

The game will be the closest match to the Reds’ 125th anniversary which will be celebrated on 3rd June and the historic milestone will be marked with activities in and around this special game in Sydney.

A proud Sydney FC Chairman Scott Barlow said: “This is an incredible opportunity for Sydney FC to play against one of the world’s greatest football clubs.

“It will be another proud moment in our history where we represent Sydney and Australia in front of sell-out crowd against a world football giant.”