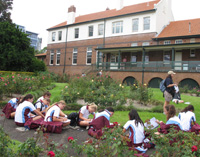 The Treasurer announced some $4.2 billion will be spent on new schools and upgrades to existing ones and as part of that spending program, the Government has formally announced funding for a new high school to be built within the Park.

This in addition to the preliminary work already underway for the Wentworth Point Public School, located on Burroway Road near the Olympic Park Ferry Wharf, which will help serve the growing communities of Wentworth Point and Rhodes and ease constraints on Newington Public School which is at capacity.

The intention is for a ‘high-rise’ or ‘vertical;’ high school to be built within the Park, maximising the school’s education and administration facilities within a relatively small footprint and taking advantage of the school’s location, surrounded by parklands and world-class sporting facilities, to provide students with unrivalled playground and sports opportunities.

The expected growth in the Park’s population envisioned in Master Plan 2030, together with the development of the Carter Street Priority Precinct and increased density of areas surrounding the Park highlights the need for a new high school to meet the needs of the expanding population of the Olympic Peninsular.