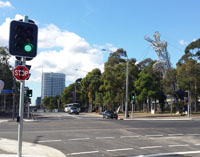 Park residents and visitors using the busy intersection at Dawn Fraser and Edwin Flack Avenue’s near ANZ Stadium will notice something new from Thursday 4 May.

The intersection now has a set of traffic lights in operation to regulate traffic flow through this busy road junction linking Edwin Flack and Dawn Fraser Avenues and Uhrig Road, dramatically improving the safety of pedestrians, cyclists and drivers in this high-traffic area of the Park.

“Having been identified as a traffic black spot, it was important to get traffic lights in to regulate traffic as soon as possible” said John Ferguson, Executive Director of Operations for Sydney Olympic Park Authority.

“This intersection had a significant accident history, especially for all the right turn movements. As a short term measure, ‘No Right Turn’ was implemented into all legs of the intersection but with the installation of these traffic lights I’m happy to say that is no longer the case” John stated.

The installation of the new traffic lights was finished just before the 2017 Easter Show however testing and programming of the lights was only recently completed.

The upgrade of the intersection to one controlled by traffic lights is part of a long term plan by Sydney Olympic Park Authority, in conjunction with Roads and Maritime Services and Parramatta Council, to improve safety for all users of the roads in and around the Park.