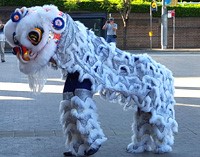 Sydney Olympic Park welcomed the Year of the Rooster in spectacular style, with a traditional lion dance making its way through the streets as part of the Park’s first Chinese New Year celebrations.

With a morning dance to greet residents, workers, students and visitors coming off the train and a midday dance to entertain those lunching in the Park, the festivities reflected the cultural diversity of the local community in Sydney Olympic Park and surrounding suburbs.

As the lion dance made its way from the train station, it stopped to bless the local businesses with a lettuce offering as it is believed that the lion has the potential to bring wealth and wisdom to anyone who invites it to do so, and so the Chinese regard the lion as an omen of good luck.

Sydney Olympic Park Authority coordinates a range of community and cultural events as part of its commitment to building a liveable centre and improving local amenity for the local community.