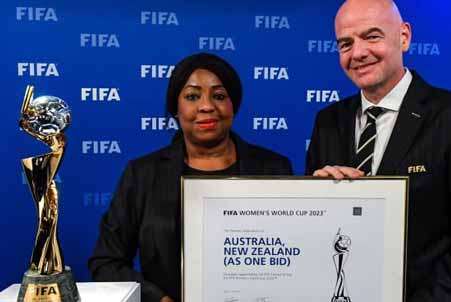 Football Federation Australia (FFA) and New Zealand Football (NZF) are delighted their ground-breaking vision to host the FIFA Women’s World Cup™ 2023 will be realised after being awarded the hosting rights by FIFA.

The official bid outlines that ANZ Stadium at Sydney Olympic Park will be the centrepiece of the tournament hosting the Final and the opening game in Australia.

A player-centric tournament, Australia-New Zealand promises to deliver record-breaking crowds and long-term participation growth, bringing football together As One to celebrate the women’s game.

FFA and NZF would also like to thank the Australian and New Zealand governments, Matildas’ and Football Ferns’ fans and the entire football family who have supported the bid from the outset, as well as the bidding team who worked tirelessly to develop a bid that will unlock the untapped football potential of the Asia-Pacific region.

“The opportunity to play in a home FIFA Women’s World Cup™ is something every footballer dreams of and I am looking forward to seeing those dreams come true. Playing for the Matildas in Australia will be the highlight of my career and an opportunity to inspire girls, both in Australia and New Zealand, and all over the world to play football. We have seen great progress in the women’s game and Australia-New Zealand will take the game to a whole new level.”