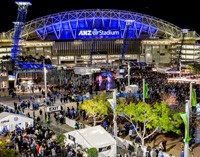 ANZ Stadium has surpassed the one million patron mark this year, with massive crowds at both Arsenal Games helping to push crowds past the mark. The Stadium’s 2017 calendar year attendance to 17 July stands at a massive total of 1,140,148 people.

The monster Arsenal crowds come on the back of a bumper 82,259 crowd for State of Origin II in June, 72,892 for Liverpool v Sydney FC in May, record attendances during the Adele and Justin Bieber concerts in March, and 44,843 for the Western Sydney Wanderers v Sydney FC A-League Derby earlier in the year.

Global superstar Adele’s two sold-out performances in March drew the biggest attendances of the year – a phenomenal 98,364 for the second show on Saturday 11 March after 96,364 on Friday 10 March.

A grand total of 25,702,732 fans have now passed through the turnstiles of Sydney’s Olympic stadium since it opened in 1999 in the lead-up to the Games.

The big year is set to continue, with the Bledisloe Cup in August, the 2017 Telstra Premiership Grand Final and the Monster Trucks Spectacular, both in October and the A-League Sydney Derby between Western Sydney Wanderers v Sydney FC in December.

ANZ Stadium is the largest venue at Sydney Olympic Park which continues to prove its place as Australia’s home of major events with more than 5,000 events annually including community, sports, concerts, other ticketed entertainment and business events.