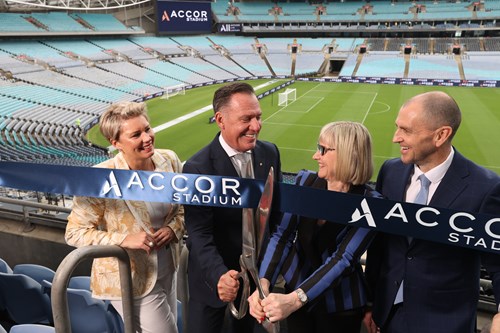 Alongside the Olympic Games in 2000 and holding up to 100,000 in concert layout, Accor Stadium as it is now known, has held and hosts major entertainment and sporting events each year ranging from international music acts such as AC/DC, U2 and Ed Sheeran.

The stadium is also Sydney’s go-to venue for major sporting contests and has seen the NRL Grand Final and State of Origin, Bledisloe Cup and FIFA World Cup Qualifiers, including Australia’s iconic moment in 2005 when John Aloisi’s successful penalty propelled the country into national euphoria and qualification for its first FIFA World Cup in more than three decades previous.

Under its new name, Accor Stadium will also provide a range of new perks for members of the company’s ALL – Accor Live Limitless loyalty program, with points able to be redeemed for a variety of money-can’t-buy experiences. The stadium will soon see a new 1,200 square metre LED screen which will be one of many new fan-friendly highlights of the venue.

The stadium’s first major event under its new name took place on Saturday night when it hosted Australia’s national women’s football team, the Matildas, as they took on USA in front of a record crowd. (See Event Wrap)

Accor Pacific CEO, Simon McGrath, said securing the naming rights for the ground was a natural partnership and a way to provide its guests and customers with more memorable experiences beyond their hotel stay.

“We are immensely proud of this partnership, which is an investment in limitless experiences that bring people together, from world-class concerts, to sporting and family events.

“ALL-Accor Live Limitless promises to give loyalty members world-class experiences beyond our hotels. Together, with our four hotels in Sydney Olympic Park with the Pullman, Novotel and ibis brands, and with the launch of Accor Stadium, the precinct will enable people to enjoy the best in hospitality and live entertainment.”

The unveiling of Accor Stadium comes in the year the company celebrated 30 years operating in Australia and the Pacific, having opened its first hotel at Darling Harbour in 1991.

Stadium Australia CEO, Daryl Kerry, said the venue had already welcomed more than 30 million patrons since its opening prior to the Olympics and was set for an exciting new era as Accor Stadium.

“We are delighted to partner with Accor as we welcome people back to watch world-class sport and entertainment events,” Kerry said.

“Accor Stadium will also play an important role in our community hosting a range of business, community and cultural events in the various function rooms and spaces inside the stadium.”