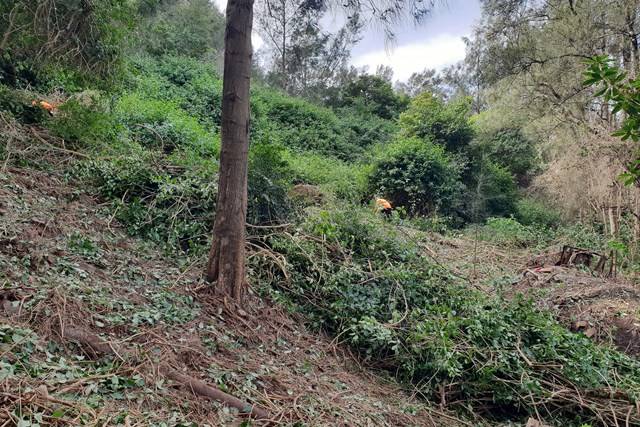 The final stand of Lantana, a nationally recognised invasive weed species, will be removed this month from the Brickpit at Sydney Olympic Park as part of an ecological restoration project now in its 14th year.

Over the period, more than 20,000 square metres of Lantana has been removed and in excess of 50,000 native plant seedlings planted to enhance the biodiversity of the former quarry of the NSW State Brickworks.

Sydney Olympic Park Authority Senior Manager, Environment and Ecology, Kerry Darcovich has managed this important ecological project in its entirety, seeing the staged removal of Lantana that has lasted over a decade.

“With such minimal human disturbance the Brickpit has developed naturally into a freshwater wetland system, and a perfect wildlife haven,” said Ms Darcovich.

“The restoration project commenced in 2007 to remove the legacy weed stands from the old brickworks site as Lantana can out-compete native species, reduce diversity and vegetation complexity.

“The project was staged over many years with only small sections of weed removed and replaced at any one time as it was habitat for woodland birds, and these small birds such as scrubwrens, silvereyes, honeyeaters and fantails are disappearing from the Sydney urban area.”

The Lantana was replaced with native shrubs, vines and groundcover species based on their ability to provide sheltering and nesting habitat as well as food resources for the birds.

Wildlife response to the works has been monitored through a combination of targeted surveys, incidental observations and an annual Sydney Olympic Park wide bird census across the life of the project.

“We are thrilled monitoring has shown a good abundance and diversity of birds taking up residence in the new habitat planted,” said Ms Darcovich.

“We are expecting this will increase further as plants continue to mature.”

Today the Brickpit remains core habitat for the Green and Golden Bell Frog, and it also provides important habitat for woodland birds, raptors, waterbirds, bats, reptiles and other frog species.

A 550 metre elevated walkway 18m above the Brickpit floor enables visitors to sensitively see the area while protecting its wildlife inhabitants from disturbance.

The Lantana replacement project is one of the many ecological management and restoration programs that Sydney Olympic Park Authority is undertaking to protect and grow the native flora and fauna of the Sydney region.