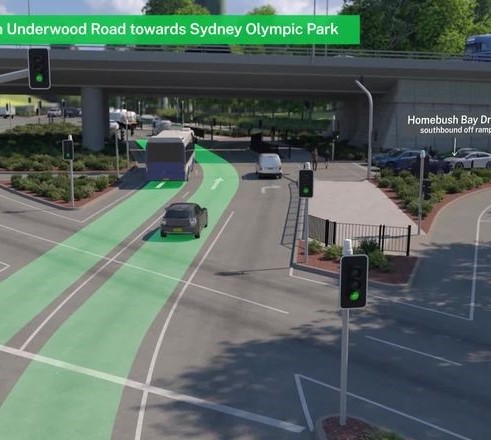 Federal Minister for Urban Infrastructure, Paul Fletcher said the project, which is being funded under the
Urban Congestion Fund, would improve travel through a particularly congested area around Sydney
Olympic Park.

As part of the upgrade:
 Australia Avenue and Underwood Road will both be widened to allow more traffic to flow into this
more efficient intersection
 Left slip lanes will be provided at all approaches and a U-turn lane installed on the Homebush Bay
Drive northbound approach will allow traffic flow back onto the southbound ramp towards the M4
Motorway
 Footpaths will be widened to become shared use pathways and on-road bicycle lanes will be
improved, and
 Refuge islands and coordinated user-activated crossings will be provided at all approaches.

The proposed intersection design known as a Diverging Diamond Interchange is the first of its kind in NSW
and was selected following the assessment of 12 options including roundabout improvements, overpasses,
underpasses, and various signalised intersection options that considered safety, efficiency, pedestrian and
cyclist connectivity, environmental impacts, community needs and cost.

Subject to project approval, construction is expected to begin in 2025 and take about 18 months to complete.